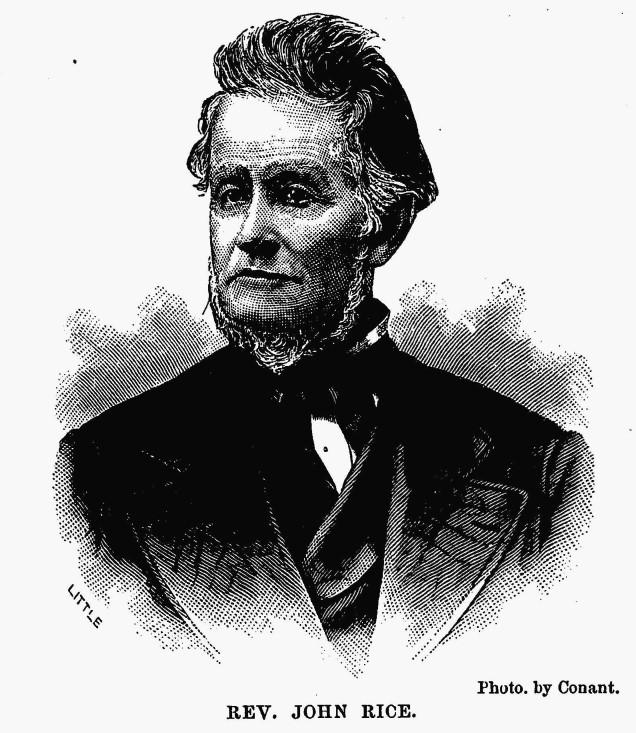 His grandfather, Lemuel Rice, was also born in Scarborough, May 2, 1756, and died Jan. 16, 1827. John, born July 1, 1810, removed with his parents to Durham when two years old. He was educated in the common school, and in the New Gloucester Academy, under the instruction of Rev. Jabez Woodman, and for three terms was a teacher during the winter months.

In August, 1833, he commenced study for the ministry, and in 1837 was ordained an elder of the Methodist Episcopal Church. Upon the close of his teaching, at the age of twenty-two, he became a traveling preacher, and in 1834 was admitted a member of the Maine Annual Conference.

His ministerial labors were continuous from 1833 to 1874, and he remains a member of the Conference as a superannuated minister, being obliged to retire from constant labor on account of ill health. Both as a devoted Christian worker and an expounder of the Scripture, his influence has been felt in the various churches over which he has been called to preside, and large numbers have been added to the church annually under his teachings.

He married, July 24, 1836, Mary T., daughter of Nathan and Mary (Haskell) Hunt, of Falmouth, and granddaughter of David Hunt, born in Quincy, Mass., July 18, 1745, who was one of the early settlers of Gray, and for many years a representative man of that town. Their children are Henry F., John H. (deceased) and Charles C.C.

Excerpted from History of Cumberland Co., Maine : with illustrations and biographical sketches of its prominent men and pioneers; Everts & Peck; Philadelphia; 1880; Page 303