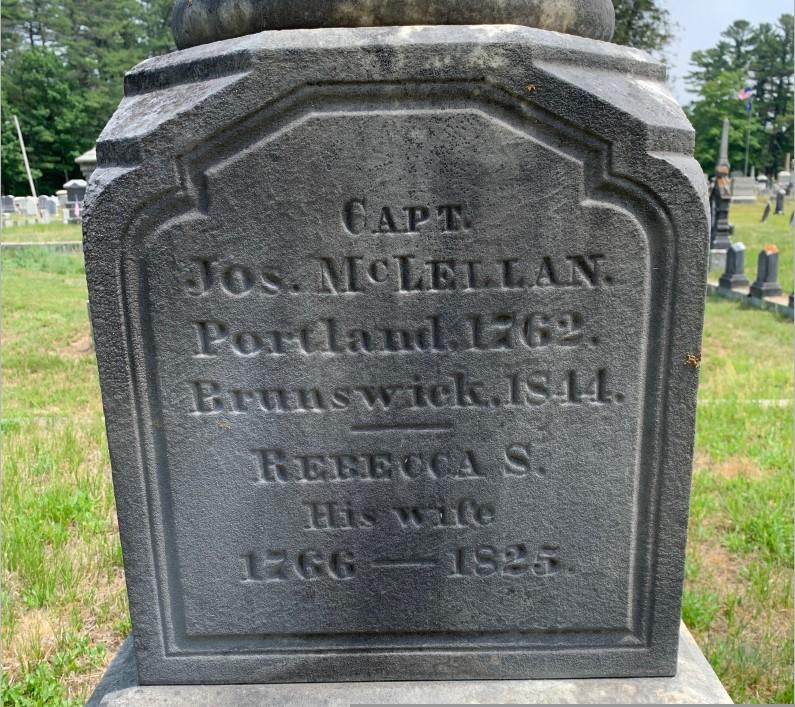 FINDING A NEW LIFE IN BRUNSWICK

From the American Revolution to the mid 19th century, the McLellan family played important parts in the commercial development of Maine. The first great family enterprise was founded at Portland by Captain Joseph McLellan Sr. (1732-1820) and lasted until the Embargo of 1807. As the Portland business collapsed, the standard was taken up by General James McLellan (1777-1854) at Bath. One of the most curious McLellans, and certainly the family maverick, was Captain Joseph McLellan, Jr. (1762-1844), of Portland, Gray and Brunswick.

At the tender age of 13, young Joseph ran off to adventure aboard the Falmouth privateer, Retrieve. An unlucky vessel, the privateer was captured by a British frigate. While taking on water at Mt. Deserf, young Joseph and a companion managed to escape. After the war, his father and brother, Hugh, formed the great mercantile house of Joseph McLellan & Son. Joseph, Jr. became a Master Mariner in the firm, but was never a partner. He sailed all over the North Atlantic, joined a Masonic Lodge at Dublin, Ireland and was once captured by Barbary Pirates.

After numerous adventures, Joseph retired from the sea in 1795. With what he had saved, and financing from his brother Stephen, Captain McLellan built a house at Gray and settled into the role of country squire. At Gray, McLellan owned the General Store, a farm, three mills, and became Postmaster, Justice of the Peace and Representative at the General Court. With money from his brothers, he erected a nondenominational Meeting House was deed a front pew. Always the family radical, Joseph Jr. was the only Jeffersonian in the lot and became the only Universalist in the Congregational clan.

Since he virtually owned the town of Gray, life went well until the Embargo of 1807. At the time Joseph owed a great deal of money to his brother Stephen, so a time payment was arranged. Stephen also acted as Joseph's agent with the Union Bank of Boston but instead of sending the payments to the bank, Stephen apparently pocketed it. Eventually, Joseph was evicted from his land and lost his property. Still popular with his townsmen, McLellan was the Gray representative at the 1819 Constitutional Convention, where he voted for Maine statehood. The next year saw Joseph spend several months in the Cumberland County Jail. Unlike his father and brothers, however, Joseph McLellan, Jr. made a splendid economic recovery. At this point, Joseph's family consisted of his wife Rebecca Stone, daughters Lydia, Rebecca, Jane. Eunice. Elisa and sons, Alfred and Theodore Stone. Daughters Mary and Charlotte had married and two sons Joseph III and William were living on their own. After emerging from jail and taking the Poor Debtors Oath, Joseph Jr. determined to make a comeback. In this he was sided mightily by his brother-in-law Captain Daniel Stone (brother of wife Rebecca) (whose brother Benjamin also married Joseph's sister. Elizabeth Betsy daughter of Joseph Sr. and son in-law, Noah Hinckley.

Family solidarity triumphed in this case. All along, Stone had sent letters to the Union Bank describing McLellan's plight and noting that his imprisonment would be "without any benefit to the Bank, or any other person, excepting the Lawyer and Sheriff'. But Dan Stone offered more than words: "now, picture to yourselves an honest, upright, industrious man and woman who have always born an unspotted character. Who never until now, knew what want was, arrived to over three score years, with five innocent and unoffending female daughters and two little sons, all dependent on them for support stript of all their property without a dollar to help themselves with". Stone continued: "When the vendu auction took place. I thot it my duty, feeling as human beings ought to feel sent a man with money, and bot of his goods and Stock, what for suffering humanity was absolutely necessary for their comfort. I gave them the loan of, “ (them). "I have since hired a house in this Town (Brunswick) and moved him and his family here. I have also hired a small store and put a few goods in it and hired him to tend it for me." Joseph, who at this time was understandably described as a "a man of weak nerves," set up store and may have briefly returned to sea as a Master Mariner.

It was not long before Stone's faith in his brother-in-law proved justified. Joseph's store prospered and expanded. When Jotham Stone, Brunswick's old Postmaster died in 1823, the experienced Capt. Joseph McLellan, Jr. was appointed to fill his position, which he did until 1840.

Their fortune restored, Joseph retired from the Post Office and was replaced by his son, Theodore Stone McLellan (1811-1905) Theodore was to become a distinguished citizen of Brunswick with a large brick home on Park Row. While a boy, he was apprenticed to the noted printer Joseph Griffin where he set type for Longfellow's Outre-Mer. "During the printing Theodore mangled the manuscript, causing the poet to dash off a bit of bad doggerel: "Mr. Griffin, Mr. Griffin!. If you let that devil Theodore tear my copy anymore I'll destroy him in griffin." In spite of this unhappy episode, Longfellow was an old family friend and is said to have studied at the McLellan house. In 1849, T.S. went to hunt gold in California but ended up as a printer. In 1852, he was stricken with Cholera and returned to Maine where he became a business man, antiquarian, columnist for the Brunswick Record, Masonic leader and supporter of the Pejepscot, Historical Society. The McLellan family had made a new life in Brunswick.

Published with the express permission of the author, William D. Barry, who was curator of research at the Portland Museum of Art at the time of this writing.