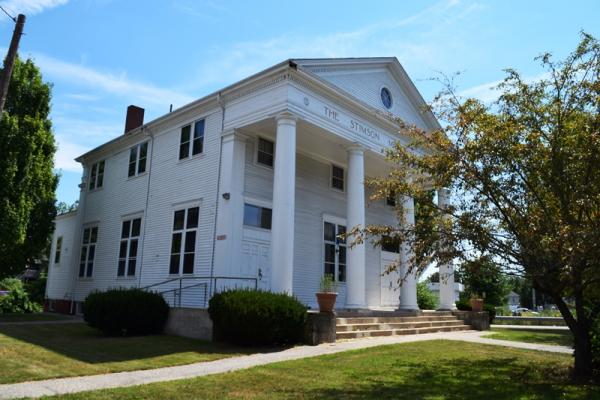 Stimson Memorial Hall is a historic government building at 4 Shaker Road in the center of Gray, Maine. Built in 1900, it served for many years as the town's main public meeting space, and is a prominent landmark in the town center.

It was listed on the National Register of Historic Places for its architectural and social significance in 1992. It was occupied by a church group and listed for sale as of 2015 as one of its most endangered historic properties, due to its poor condition and lack of preservation plan.

Stimson Memorial Hall was built in 1900 at a cost of about $6,000 by Mrs. Abbie Stimson Ingalls, Charles, George, and Martin Stimson and given to the town in memory of their parents. Capt. Theophilus and Mary Lawrence Stimson, together with a trust fund of $5,000. At first it was managed by a board of trustees selected by the Stimsons, consisting of James T. Hancock, Orin S. Higgins, John W. Frank, and George W. Osgood together with three selectmen. Soon after the building was completed, a library association was formed with the following officers: President, Harr L. Libby; George M. Stevens, Treasurer; Rev. Frank Pierson, Secretary; Rev. H.L. McCann, Fred Ramsdell; Jas. T. Hancock and the President and treasurer as directors. George Stimson said he would give them $500 if they would raise an equal amount. This was done. Equipment bought and shelves built.

Miss Helen I. Merrill was employed as librarian; 632 books were bought and a number give so that 700 volumes were ready at the opening which occurred January 26, 1907. After the library was opened, the State gave the sum of $200 which was a custom at that time. Later the Stimsons and Ingalls all contributed books and the association put on entertainments to raise money to enlarge the library. After the first year, the town raised money to pay running expenses and from time to time raised extra money to buy books. Stimson Fund, give to the Town of Gray in 1921 was $7500