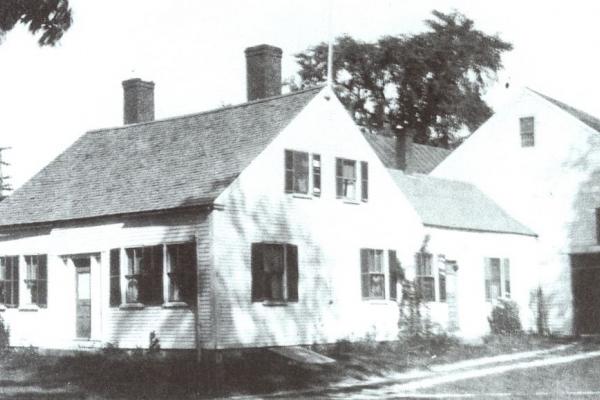 The former site of Gray's first Post Office (1795) in the McLellan House owned and built by Joseph McLellan in 1793.

In the 1780s, Joseph McLellan came to North Gray and built a two-story house, a sawmill, and a small store on the northeast corner of the intersection of the Megquire Road and the road between East and North Gray. In about 1793, he built the residence now known as the McLellan House and opened a store, said to have been the first at Gray Corner, in one of its front rooms.

It was not unusual in the last century for a merchant to have a store in their home or, as today, to have living quarters in a structure built for a store, since by these arrangements the expense of heating a separate building and the bothersome chore of tending its first late at night and on Sundays was eliminated.

Joseph McLellan was Gray's first postmaster, appointed on March 9, 1795 with the post office located at the McLellan House. Just how many years Mr. McLellan ran his store and post office at the Corner is not known, but there is evidence that he was in North Gray running a saw mill by 1815.

In 1805, Captain McLellan represented Gray at the General Court of Massachusetts, and on October 29, 1819, he represented the town at the signing of the State Constitution. A short time later he move to Bath where he became a successful merchant and prominent citizen.

His home at Gray Corner became the Archie Harris home and survived the fire of 1921. It was torn down in 2010. The site was developed as the Village Green pocket park in 2021.

Read more about Joseph McLellan in our Notable Citizens section.