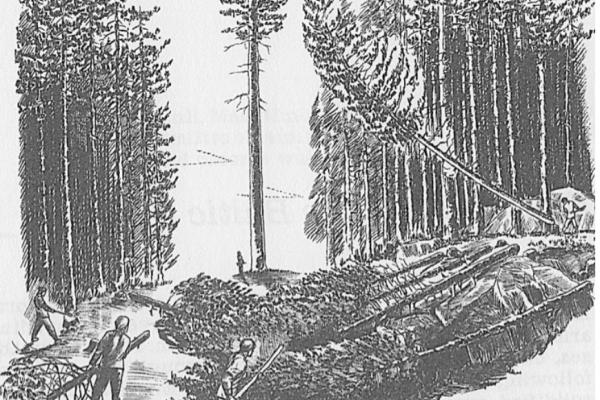 It is said that in 1762, Moses Twitchell with his wife and children accompanied by Moses' father, Thomas, a brother, Jeremiah, and a crew of men, came up a spotted trail through Falmouth, bringing with them teams of oxen, a cow, and some hens. The Twitchells built a cabin near the site of the Everett Higgins house on the Old Portland Road. Although records that follow indicate that Moses Twitchell, John Matthews, George Knight, Samuel Young, John Stinchfield, Daniel Cummings, David Hunt, and Nathan Winslow were working in the mills in the northern part of New Boston (North Gray) as early as 1760, they apparently had not brought their families, and the Twitchells are credited with being the first family to settle permanently in the town. Moses established a King's Mast Yard in what is now [i.e. 1978] Elva Webster's field. The mast timbers were cut and hauled to the riverside during the winter; in the spring they were floated down Pleasant River through Westbrook to Fore River, where they were loaded on vessels or rafted and dispatched to England and other destinations.