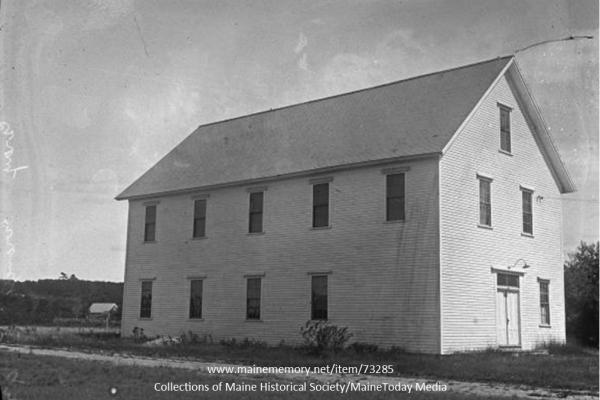 Late 1800s. Originally an exhibition hall for the Gray Fairgrounds. Later became the home of Dr. Cushing, a dentist, and the Grange Hall. Now the home of Enercon.

The charter for the Gray Grange was received on November 24, 1874. In June 1875, the Grange moved its meetings to the Town Hall, which they hired for $12 a year and where they met for the next 12 months.

Gray Grange took a new lease on life in 1888; regular meeting were resumed and Cumberland County Pomona was invited to meet in Gray of that year. The renewed interest continued and in 1903, the Grange Hall - which had been the exhibition hall of the Gray Park Association - was purchased for $400. It was renovated for an additional $600 plus many hours of hard work by members under the direction of Brothers W.A. Chipman and E.P. Foster. The first meeting in the new hall was held on October 1, 1903.

Following this, the hall was used for many years by the Grange and often by other societies including the Odd Fellows, Rebekahs, and Pythian Sisters for meetings and other activities.

On the 23rd and 24th of October, 1925, the Grange held a fair and exercises in celebration of its fiftieth anniversary. Mrs. Leonora Whitney Sweetser presented a history of the early days of the Grange from which much of this material was derived.