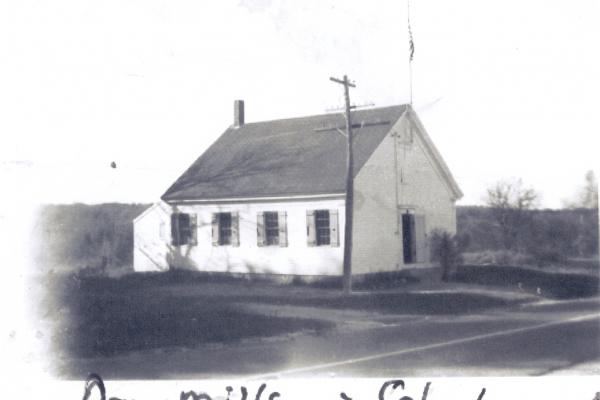 The Dry Mills one-room school, built in 1858 in District #3, became the largest ungraded school of the town in 1883. In 1959 the last class to attend this school consisted of only first and second graders. The building was restored and moved to its current location on Game Farm Road in 1987. Today, it is a living museum, attesting to the educational environment in the mid 1800’s.

From the application for its inclusion in the National Register of Historic Places:

"Constructed about 1857 and used in its original capacity for 102 years, the Dry Mills School is a well maintained example of a mid nineteenth century rural one-room schoolhouse. The one-story, gable roofed frame building exhibits modest Greek Revival style detailing. It is the last example of a one-room school in the Town of Gray that has not been significantly modified for other purposes. Threatened by its proximity to Route 26, the former school was moved to its present location in 1990 where it was subsequently rehabilitated by the Dry Mills School Committee. The building is eligible for nomination to the National Register of Historic Places under Criterion C for its architectural significance. Criteria Consideration B applies to this property because it has been moved."

"First settled by Anglo-Americans during the second quarter of the eighteenth century, the Town of Gray was incorporated on June 19, 1778. By the taking of the census in 1850, the town's population stood at 1,788 persons, a figure that was to decrease over the next three decades, rebound in 1880, and then rapidly decline thereafter. In the 1858 History and Description of New England, farming was listed as the principal business in the town, and there were two factories, two sawmills, and a new steam mill."

"Gray's educational history follows the pattern repeated throughout rural Maine. According to early records the town's first two school districts were formed about 1780, although the first schoolhouse was not erected until 1793. A year later, the town was divided into four school districts, a process that was repeated as the need arose until there were a total of twelve districts, each of which had its own building. The Dry Mills School was located in District No. 3. In addition to the several district schools, which typically provided instruction at the primary and grammar levels, the Town of Gray appropriated fluids for high school education beginning in the early 1800s. Although it is not clear where classes were originally held, after the construction of a two-story brick schoolhouse in 1843 in Gray village, the high school was held in the upper level of this building. In 1876, wealthy local resident Henry Pennell announced that he would give the town a new high school facility which, upon its completion in 1886, was named Pennell Institute (NR 7/12/82)."

"School consolidation beginning in the early twentieth century doomed Gray's one-room schoolhouses to functional obsolescense, and the Dry Mills School was finally closed in 1959. During the 1970s the interior of the building was renovated for use as a preschool. By the late 1980s interest grew in preserving the school as a museum. This plan included the relocation of the building in 1990 to a more protected site than its original one along heavily traveled Route 26. Restoration of the school has been recently completed."

NOTE: GPS coordinates are approximate to the original location of the schoolhouse on Route 26, Shaker Rd, according to the Dry Mills map inset of the 1871 Atlas of Cumberland County, Maine.