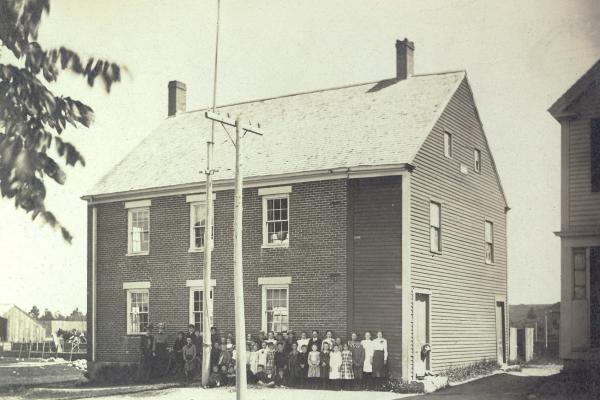 From Volume V, Number 21 of the Gray News on October 15, 1973, is the following excerpt referencing the Brick Schoolhouse:

The brick part of the building pictured was constructed somewhere around the 1840's. It was known as "The Brick Schoolhouse" and was located almost directly across the street from the brick building housing apparatus of the Pine Tree Telephone Company. Those who attended or remember the school say that its from was close to the sidewalk and that it was less than 20 feet from the white house next to the Post Office. The fence with the two white doors at the right of the picture concealed the toilets near the back of the building. After the wooden extension was added, probably in the late 1870's, the front of the building housed an entry, the woodshed, and the stairs to the second floor which were originally on the outside of the brick front. The entry had a long board with hooks for the children's clothes, a locker for the teachers, and a shelf with a bucket of drinking water and a long-handled dipper.

This schoolhouse was used for the pre-high school pupils of the Gray Corner district (District No. 5 until districts were abolished about 1895). It was torn down in 1902 when classes were moved into the new elementary school, now used for a library and school offices which had just been completed. In general, terms in the old school started in late April, early September, and early December. They averaged about ten weeks in length. The average number of pupils from 1890 to 1895 was 26. Until 1875, The Brick Schoolhouse also housed the Gray High School, when one was conducted. The high school, which used the second floor or the schoolhouse, had only one term of about ten weeks in January, February, and March. In 1876, high school classes were held for a few years in the Town Hall and then the high school was discontinued until the Pennell Institute opened in 1886.

According to a newspaper article written by S.P. Mayberry about 1886, the brick schoolhouse was the second of three schoolhouses that stood near the site of the present library. He describes the first as follows: " this school house was a high, one storied wooden building with a four faced roof; the sides were either clapboarded or shingled. It was on the site of the present brick school house. It stood side to the Shaker road and the entrance was next to the southwest corner."

"Inside on the southern end, was a fireplace which was supplied with a great back log and fore stick. On these the fire was built of some pine kindlings and dry wood which the boys brought with them and when this was sufficiently kindled green wood was piled on and it took considerable part of the forenoon before the house was even warm. Near the master's desk was a cast iron box stove. Originally it was divided inside, the upper part was used to warm the children's dinners and the lower part for the wood. It would take in a three foot stick. On the top was one hole, in which was usually placed a kettle. Tradition says this was the first stove used in the town."