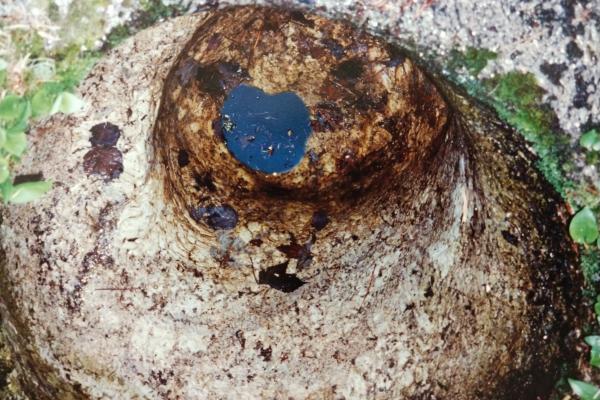 Totten Road It's filled with water, but if you were to stand in it, it would come to your chest- Local historians speculate the Kettle was used by Native Americans.

As told by Jason Turcotte in his June 26, 2003 article "The Indian Kettle" for The Monument:

Anyone who has seen the Indian kettle in Gray agree on one thing, its ingenuity. In a world of automobiles, internet, and technology, it's difficult to imagine that hundreds of years ago, a more  primitive and resourceful way of living took place at its site on Totten Road, as Native Americans called the land of Gray their home. The Indian kettle is one of eighty-one cultural assets to the town and is protected in Chapter 5, entitled "Natural Historic & Cultural Resources," of Gray's  Comprehensive Plan.

The kettle's age is uncertain,  but the Gray Historical Society  does believe it was there long before Gray became a town 225  years ago.

The perfectly round kettle rests in a large rock, where it descends four or five feet underground. The kettle is often filled with water, but former owner Don Clark, who sold the site as a part of 3-lot subdivision, recalled seeing the bottom after his son would siphon the water from it. He described it as smooth, polished [rock] and speculated that something round was lowered into it. "There's different theories of how it got there," said Clark. The kettle evolving from a glacial formation is the most likely of those theories.

Glacial kettles are deep indentations in the earth. They are formed when smaller blocks of ice separate from the main body of a glacier. Once it melts, it leaves a hole in the earth. It is estimated that glacial kettles are approximately 10,000 years old and research has shown they are common in Maine and other parts of the Northeast.

"If you were to stand in it, it would come up to your chest," reminisced Louise Knapp of the Gray Historical Society. Knapp heard that it was perhaps used for the storage or grinding of food. Others, such as Helen Taylor also believe its purpose was for either food storage or cooking.

From Totten Road exists a short, 10 foot wide public easement leading to the Indian kettle and supposedly another Native American tool nicknamed by residents as the "punch bowl," which hasn't been accounted for in recent years. "This conveyance is subject to a 10-foot path easement, to "Indian Pot" so-called, reserved for the inhabitants of Gray," according to the deed given to residents at 96 Totten Road. Unfortunately, in recent years the path has become unwelcoming to the public and poorly maintained.

'They took advantage of the easement," said Clark of the original owners he sold the lot to. The dirt easement evolved into an unpaved driveway and the former residents constructed old sheds along the public pathway. Helen Davis, of the Historical Society hadn't visited the kettle since Clark sold the lot. She said the owners put their dogs by it, left junk everywhere, and even threatened to charge people to see it. The easement was anything but public.

Its inclusion within the Comprehensive Plan recognizes the kettle as having historical and cultural relevance to the town, deserving of its utmost protection. "The intent is to flag and point out these resources, show where they are and what they are, in hopes that they can be preserved historically by the town and by developers," said Town Planner Dick Cahill. But the Indian kettle proved that task is easier said than done.

According to Clark, the lot was sold to new residents four or five years ago. Today the path looks like nothing more than an ordinary driveway, marking a trail compiled of old cars, cinder and other debris scattered from the previous owners. And while the rubbish has tarnished its surroundings and the public easement, the Indian kettle remains untouched, serving as a permanent the town's history and culture.