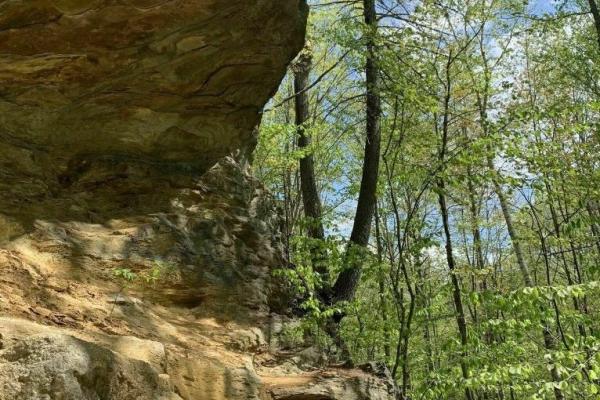 A Strange Freak of Nature

A famous wonder of nature in Gray [sic*] is known by the name of Glover's Wig. This can only be reached by a tramp of more than a mile from the main road thru a jungle of bushes and to a tangled mass of ferns and other vegetation. The Glover's Wig towers in majesty. What a freak of nature! Imagine a solid ledge rising into the air for one hundred feet and then tipping over at the top to a distance that formed an arch or roof beneath which a regiment of men might easily be sheltered. This precipice extends to a distance of fully 400 feet, ragged and sublime in its grandeur.

Perhaps the most marvelous part of this ledge is the character of the rock. It is iron, but not of the kind used by the blacksmith. It is of the chemical kind, given by physicians to strengthen their patients and is easily worked. By clambering up the sides, we could dig out pieces of the soft rock that could dissolve in the mouth leaving a pungent taste. The attrition of the elements has worn away the soft rock in the center, leaving the arched roof above and this has been frescoed by the hand of nature with a hundred brilliant shades of scarlet and green. This disintegration is rapidly going on and it is a question of the stone could not be turned to commercial purposes. It is said that the Rickers have offered to build a road from the main turnpike to this spot at their own expense providing that their guests can have the privilege of going there and enjoying the sight.

While there is no date attributed to this piece, our records indicate that Bea Murray wrote regularly for the Portland Press Herald. *The article describes the Glover's Wig location as Gray; however, it is actually just over the Gray line off Egypt Road in Raymond. The rock formation and the trail leading to it is now [2021] part of the Morgan Meadows Wildlife Management Area, owned and managed by the Maine Department of Inland Fisheries & Wildlife.